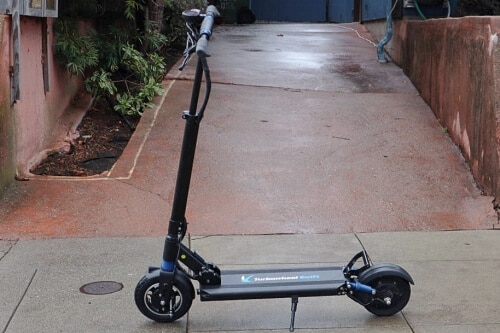 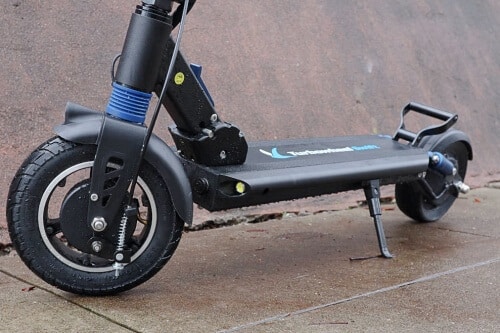 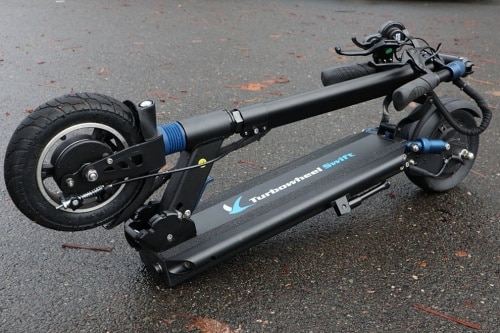 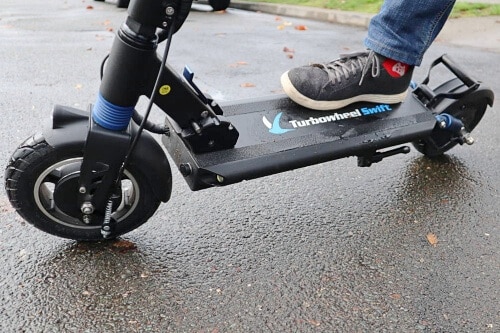 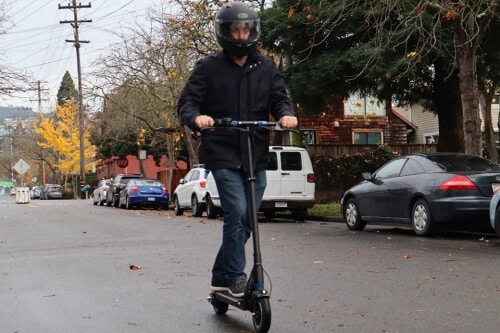 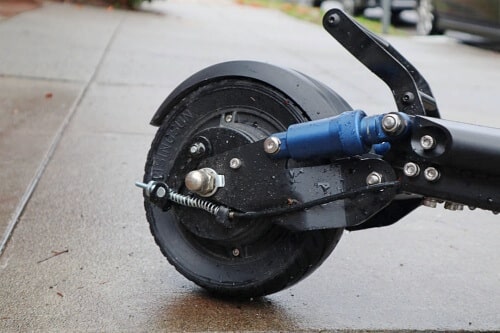 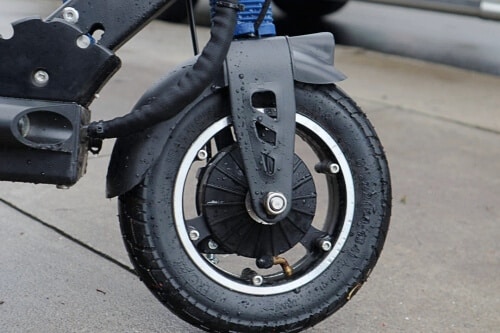 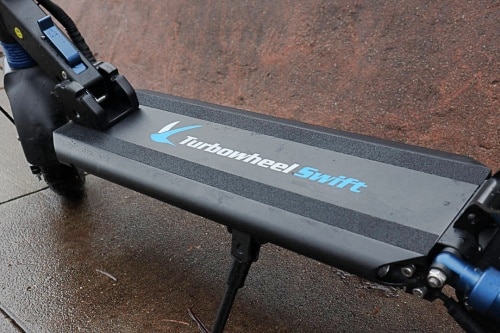 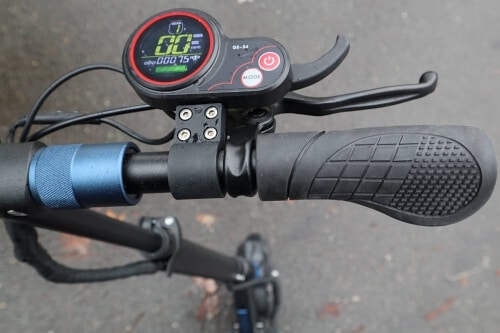 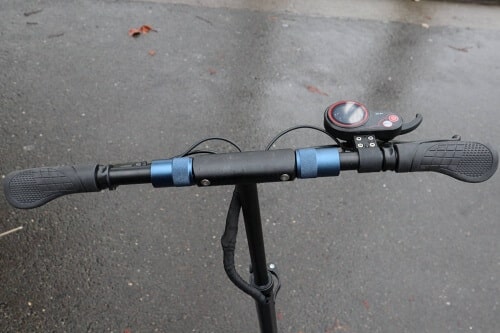 The Turbowheel Swift has been discontinued. The Swift is a well-balanced scooter that can serve a variety of purposes. It has enough battery to go long distances between charges. It has good enough suspension for poor roads. It folds compactly enough to store almost anywhere, including a commuter train.

* Based on our performance tests which may differ from the manufacturer’s claims.

The Swift is has been discontinued. The most comparable scooters are:

The Turbowheel Swift is a take on the Titan T8 — a popular chassis used on many scooters — but with a handful of quality and functionality upgrades. The Swift features a battery pack made of LG cells, towing handles, and dual drum brakes.

This frame, feature combination, and price-point make the Swift a well-balanced scooter targeted for both first-time buyers and those interested in upgrading from more budget entry-level models.

If you are looking for a well-balanced scooter with decent range, acceleration, and weight — that isn’t a racecar and won’t break the budget — the Swift is an attractive option.

Segway Ninebot Max Review: The Best, Most Reliable Scooter Under $1000

Unagi Model One Review: Lightweight Scooter is Straight Out of the Future

** Based on our independent testing, which may differ from manufacturer’s claims.

Results below are based on our independent performance testing and not data provided by the manufacturer.

The Swift, like other Titan T8-based scooters, has acceleration that is initially laggy. However, around 5 mph, the 500-watt brushless DC electric motor comes to life. It pulls strongly up to 15 mph then slowly rolls off until you hit the top speed of 24.0 miles per hour.

See our performance testing page for real-world acceleration data on other scooters.

The Turbowheel Swift is an apt hill climber. It will not suffer from extreme slowdown like you may have experienced on budget scooters or rental ones when they encounter steep hills.

For the average rider, this is more speed than you’ll need, and though it doesn’t sound thrilling given the prevalence 40 mph scooters — it’s quite fast in practice.

The scooter has a 614 watt hour battery made of LG M26 (INR chemistry, lithium-magnesium — one of the best and safest for electric scooters) cells.

We tested the range of the Swift (165 lb rider, scooter in fastest setting, frequent stops, and hilly terrain) and got 19.6 miles on our test track.

We use the same test track for every electric scooter and ride the scooter at the maximum safe speed with quick acceleration.

You can read more about our testing methods or find results from other scooters here.

The Swift departs from other takes on the T8 Titan with the incorporation of dual drum brakes and an electronic brake. We love to see braking mechanisms present on both wheels for improved redundancy, safety, and braking performance. The rear motor wheel also has an electronic brake.

We tested the braking performance of the Swift and found it came to a halt in 13.8 feet from a speed of 15 mph. Braking is better than the Horizon (a single-brake version of the scooter), which took 23.0 feet to stop.

We like drum brakes because they make the scooter more robust and generally require zero maintenance. Unlike disc brakes, drum brakes are fully enclosed and protected from the environment; they are not at risk of getting bent or damaged.

The Swift features both a front spring and rear spring suspension. The suspension, combined with 8.5-inch/8.0-inch tires (pneumatic in the front and solid in the rear), provides modest damping overall. Additionally, the suspension is relatively quiet during normal riding; you’ll only hear significant suspension sounds from impacting large potholes or taking a big drop.

The scooter is nimble. Making sudden turns, carving, or slipping between obstacles is relatively easy. In wet conditions (which much of this review was performed in), the rear tire has less grip compared to the front and is more likely to lose traction during sudden deceleration or change of momentum.

Compared to other variants of this scooter that we’ve reviewed (such as the Horizon), the suspension is stiffer, and therefore more suitable for heavier riders who might otherwise bottom out.

Coming in at 40 lbs, the Swift is by no means a featherweight; however, it folds to a small size and is perfect for storing in compact spaces.

The Turbowheel Swift has folded dimensions of 39-inches by 7-inches by 14-inches, making it (along with the Zero 8 and Horizon) one of the most compact electric scooters on the market.

The Swift has three mechanisms for reducing its size: a folding stem, folding handlebars, and telescoping stem.

Folding the stem is easily accomplished by pulling on a metal lever near the deck; once folded, the stem locks into position for carrying one-handed.

The handlebars fold, reducing the width of the scooter to a mere 7-inches. This feature is especially useful for storing under a desk or bringing onto a crowded commuter train.

The handlebars using a screwing mechanism to lock solidly into place, though we did notice a tendency for them (the right one in particular) to loosen up as we were riding.

Finally, the stem is also telescoping, allowing the height of the handlebars to be adjusted and also allowing it to fold to a short 39-inch length.

We found that the towing handle provides grip for carrying the scooter (both folded and unfolded if you don’t want to bother). It also serves as a hard point for locking up the scooter.

The included dolly wheels (not shown in picture — we ended up removing them) wouldn’t contact the ground when installed, except at the steepest of angles (making them not very useful). We reached out to eWheels about this and will update this part of the review when we get the new dolly wheels.

The Swift has a pretty standard cockpit with dual brake levers and the ubiquitous finger trigger accelerator and LCD. This QS-S4 LCD trigger throttle appears on many scooters. You’re probably familiar that we aren’t huge fans of it for several reasons.

First, it’s somewhat cheaply constructed and prone to breaking if it gets clipped during a scooter fall. Second, ergonomics on it are rough — your index finger is outstretched and will start cramping on extended rides (e.g., our nearly 20-mile range test).

The LCD is relatively easy to read, even in daylight, and displays current speed, mileage, battery level, and riding mode. It also allows you to tune the controller through so-called P-settings that control electronic braking, acceleration, unit display, and other behavior.

The handlebars grips are made of quality rubber and firmly attached to the handlebars — we had no problems with spinning or slipping off.

Talk about the presence/lack of lights and how bright they are. Cover all lights (deck, front, tail). Add the boilerplate line below if they need more lights.

The TW Swift has built-in front, rear, and deck corner button LED lights. All of the lights are mounted relatively low to the ground. The disadvantage of having low mounting is that the light doesn’t project very far — reducing visibility.

The red LED tail lights turn on when brakes are activated.

Overall, the built-in lights are nice to have if you end up riding at night or in poor visibility conditions.

However, because they aren’t exceptionally bright and we recommend additional lighting accessories for riding regularly at night.

The Swift has an 9-inch pneumatic inner tube tire in the front and an airless (solid) 8-inch tire in the rear.

This mixed configuration is meant to provide a balance of performance/ ride quality and reliability. The front pneumatic tire offers better grip and vibration damping while the rear tire is immune to flats. Because rear tires tend to get flats more often than front tires, this is a logical trade-off.

The noticeable downside to the airless rear tire is that it is less grippy in wet conditions — you’ll have to be a bit ginger with cornering and hard braking. Otherwise, we think many will appreciate the reduced occurrence of flats compared to dual pneumatic tires.

Learn more about preventing and repairing flats with tire slime.

The deck has 18.2-inches by 6.2-inches of usable space and 4.2-inches of ground clearance. The deck-to-handlebar height (maximum) is 38.4-inches.

The TW Swift — like other Titan T8 variants — has good overall build quality and otherwise good design, except for some annoyances that we discuss later.

Assembly and part quality are good; we anticipate that this scooter will require lower-than-average maintenance over its life thanks to drum brakes and a solid rear tire.

The cabling and wires leading from controls in the cockpit to the controller and mechanical components are well-routed and encased in a protective sheath.

We’ve noticed the incorporation of 6-prong quick connectors on electronic components, making it much easier to swap these out without having to open up the deck. If, for example, the LCD was damaged, it could be replaced easily. Quick connectors are a subtle but nice touch that makes the scooter more maintenance and repair-friendly.

In the unfolded configuration, the scooter is solid with no creaking and only minimal play in the joints of the stem when pushing or pulling on it hard.

The TW Swift has a few gripe-able items worth mentioning. The kickstand is a little short, and scooter tilts quite far when resting on it. The charging port is on the front of the scooter deck, and the plug is at risk of being bent if the front wheel is turned while charging.

Unfortunately, the Turbowheel Swift has no official water resistance IP rating. Though we exposed it to very light rain with no problems, there are no guarantees about its ability to survive exposure to water.

The Turbowheel Swift is a well-balanced scooter with additional features, including dual drum brakes, dolly wheels, and towing handle, and a battery made of LG cells. These features help to differentiate it from the ranks of other Titan T8 electric scooter variants.

We think of the Swift, and other T8 variants like the Horizon, as the Honda Civic or Toyota Corolla of electric scooters. It is a nice balance of range, speed, and folding features. Build quality and design are good. The price is very appealing given the features, but still value-minded.

If this package doesn’t appeal to you or you need something with longer range, look at our alternatives to the TurboWheel Swift.

You can also check out our Editor’s pick of best electric scooters.

The Swift is has been discontinued. The most comparable scooters are:

Note: These specification are provided by the manufacturer and may differ from our real-world testing. 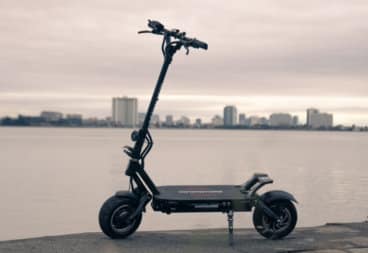 Dualtron Thunder 2 Review: Most powerful Thunder ever dominates the road 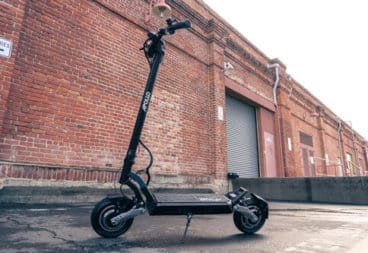 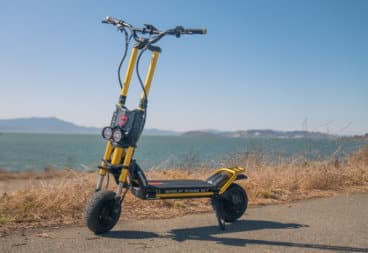 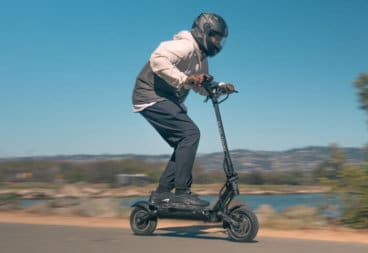 Dualtron Victor Review: The secret behind its impossible performance